Some cool how can we images: 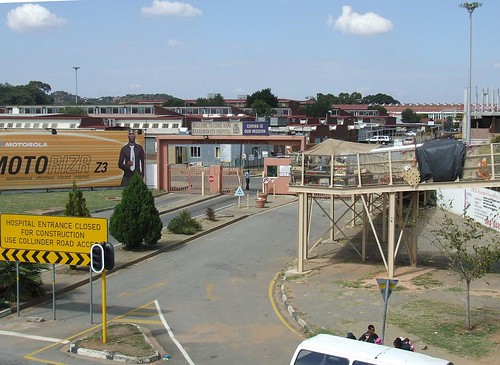 2007-04-22 11:14:50
Posted Date: 2007-04-22 11:14:50 , By : pandrcutts
how can we
This is the view of the hospital looking south from Hospital Footbridge in Diepkloof , Soweto in the province of Gauteng, South Africa . The bridge spans the Potchefstroom Road at the north of the hospital. The hospital’s entrance gates are at the position of marker A on this map. Potchefstroom is a town lying about 110 km southwest of Soweto.

As can be seen from this Street View, the construction referred to in the yellow notice on the photo has been completed and the entrance is open again. The StreetView also shows that bridge itself has been covered over since we were there in 2007 when it looked more like this.

As at 2007, with 3200 beds and 6760 staff members, occupying 173 acres the Chris Hani Baragwanath Hospital is reputedly the largest hospital in the world. Certainly it’s the largest in the Southern Hemisphere. There’s an aerial view of the site here. The hospital was opened by the then Prime Minister, Jan Smuts on 23 September 1942. It was the middle of WWII and six years were to pass before the seeds of apartheid were to be planted by Smuts’ successor, Daniel Malan. During the opening ceremony, Smuts said that after the war the Imperial Military Hospital, Baragwanath, as it was then called, would be used for the Black population of the Witwatersrand. In the meantime the hospital would be treating the war casualties. At first they were mainly from the Middle East command but, towards the end of the war, the hospital began to specialise in tuberculosis patients, both from the Middle East Command and from the Far East Command.

The hospital was built next to the site of a hostel founded by John Albert Baragwanath (1842-1928), a Cornishman who had emigrated to South Africa in the 1890’s. He was born in Falmouth, but the family’s roots were in Towednack near St Ives. There are still Baragwanaths in South Africa. Read about them here, here and here. .

In 1948 Smuts’ United Party was defeated by the National Party led by Malan. A few years later, South Africa left the British Commonwealth. This made ”Imperial” an inappropriate description so the establishment was renamed Baragwanath Hospital. Read more about the history of the hospital here and about how it is in the present day here. In 1997, the hospital, already by then one of the largest in the world, was renamed the Chris Hani Baragwanath Hospital in his memory. Nowadays it admits more than two thousand patients daily. About half of them are HIV positive.

It’s said that, in his time, Chris Hani was the most popular member of the leadership of the ANC after Nelson Mandela – particularly among the poorest communities. He was born as Martin Thembisile Hani, the fifth of six children, on June 28, 1942 in kuSabalele in the Transkei (now the Eastern Cape). That region was the birthplace of many other leaders of South Africa’s protest movements – names such as Nelson Mandela himself, Walter Sisulu, Clarence Makwetu, Bathandwa Ndondo, Lindiwe Msengana-Ndlela, Steve Biko and Matthew Goniwe were all born in and around the Eastern Cape.

Chris Hani attended Lovedale school and went on to study literature at the University of Fort Hare. When 15 he joined the ANC Youth League and engaded in protests against the Bantu Education Act. After graduating, he joined Umkhonto we Sizwe, the armed wing of the African National Congress (ANC). In 1963 he was exiled to Lesotho where he was the target of assassination attempts. He received military training in the Soviet Union and, after serving in the Rhodesian Bush War in what is now Zimbabwe, he moved to the ANC’s headquarters in Lusaka, Zambia becoming head of Umkhonto we Sizwe.

In February 1990, President F.W. de Klerk announced the lifting of the bans on the ANC, the Pan Africanist Congress (PAC), the South African Communist Party (SACP) and thirty-one other organizations which, unitl then, had been declared to be illegal by the apartheid regime. Soon after, Chris Hani returned to South Africa and took over from Joe Slovo § as head of the SACP in 1991. He supported the suspension of the ANC’s armed struggle in favour of negotiations.

On 10 April 1993, Chris Hani was assassinated by a Polish far-right immigrant named Janusz Waluś, who shot him in the head as he stepped out of his car. Waluś fled the scene, but was arrested soon afterwards after Hani’s neighbour, a white woman, called the police. Clive Derby-Lewis, a senior South African Conservative Party M.P., who had lent Waluś his pistol, was also arrested for complicity in Hani’s murder. Derby-Lewis was tried and sentenced to death for his role in the assassination but the sentence was commuted to life imprisonment when capital punishment was outlawed in 1995.

In June 2010 Derby-Lewis applied for parole on the grounds that he was over 70, and was entitled to parole in terms of South African law for having served in excess of 15 years in prison. In November 2010, Derby-Lewis’ lawyer reported that Derby-Lewis was receiving treatment for skin cancer and prostate cancer, hypertension, and for a gangrenous spot in his leg. The Correctional Services department reported that a decision on his parole could be announced in early December. As at March 2011 I don’t know whether or not such an announcement was made.

The Diepkloof district of Soweto has associations with Alan Paton, the author of the inspirational book Cry, the Beloved Country that was written in 1946 while the author was touring Europe and America. Smuts was still Prime Minister of South Africa while the book was being written but by 1948, when the book was published, the National Party had won power and the seeds of Apartheid were being sown. There is a mention of the hospital in the book.

Paton was born in 1903 in Pietermaritzburg capital of what was then Natal and is now KwaZulu-Natal. He was the Principal of the nearby Diepkloof Reformatory from July 1935 to June 1948. In Diepkloof – Reflections of Diepkloof Reformatory, Clyde Broster, senior English master at Rondebosch Boys’ High School, Cape Town, has selected some extracts from Paton’s works that were inspired by his time at the Reformatory. First in the collection is To a Small Boy Who Died at Diepkloof Reformatotory – a poem in memory of a 6-year-old pupil of the Reformatory. I trust that such a boy, should he have offended nowadays, would be more humanely treated. Also in the book is a poignant short story about a boy called Ha’penny spent time in the Reformatory in the early 1940s. It can be read in full here. It’s only a couple of pages long – but it’s well worth reading. Alan Paton died in 1988 – just before the ANC Government took power. He had constantly opposed the apartheid regime and many of his stated beliefs are now enshrined in South Africa’s Bill of Rights.

A few days before first writing this in January 2009 I had heard the news of the death of Helen Suzman, a great South African dissident with Lithuanian Jewish ancestry. Suzman was born in Germiston in the Witwatersrand in 1917 and first entered the South African Parliament in 1953 as a member of the fast-declining United Party. She later switched to the Progressive Party which eventually became the Progressive Reform Party. At one stage Suzman was the only woman – and the only member opposing apartheid – in the South African Parliament. Suzman often asked questions in parliament about abuses of civil rights. On one such occasion, a cabinet minister yelled at her "You put these questions just to embarrass South Africa overseas." She replied "It is not my questions that embarrass South Africa – it is your answers". Her Progressive Reform Party was one of those which merged to become the present-day Democratic Alliance (South_Africa), now (February 2009) the official opposition party in the South African Parliament. Helen Suzman stood beside Nelson Mandela, the country’s first black president, when he signed the new constitution in 1996.

Joe Slovo (1926-1995) was another great South African dissident with Lithuanian Jewish ancestry. His family emigrated to South Africa in 1934 when he was eight. He joined the SACP in 1942 and in the early 1960’s was instrumental in forming an alliance between the Communists and the ANC. In 1963 he was exiled and lived in Britain for a while. In was elected general secretary of the SACP in1984 and returned to South Africa in 1990. He died of cancer in 1995. A settlement east of Cape Town has been named after him.

In case you’re wondering, the Motorizr Z3 is (or perhaps was) a mobile phone.

Photos of some of the people referred to in this description can be seen in my comment below. Others can be seen by clicking on the appropriate links that follow. Some of the links contain additional information:

This description was first incorporated in June 2007 and has been revised and expanded several times since. The current version dates from March 2011.

How Going To The Movies Should Be 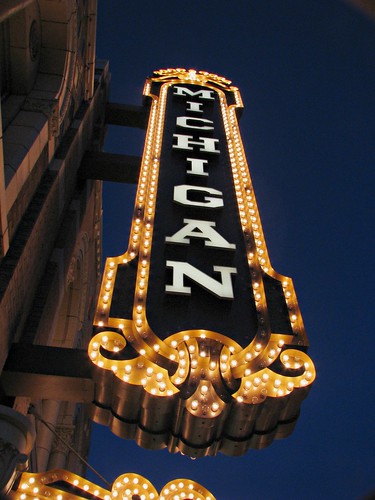 2008-03-08 18:54:00
Posted Date: 2008-03-08 18:54:00 , By : Jeremy Roof
how can we
I thought I’d break up some of the Chicago pictures. This is a pictures of the sign above the marquee at the Michigan Theater. My Wife and I went and saw "In Bruges" (really good movie btw) there. I have never been to a theater like this before. There was a small private theater in my home town back in New York, but it wasn’t as well appointed as this place. I hope we can go back there again before we movie.